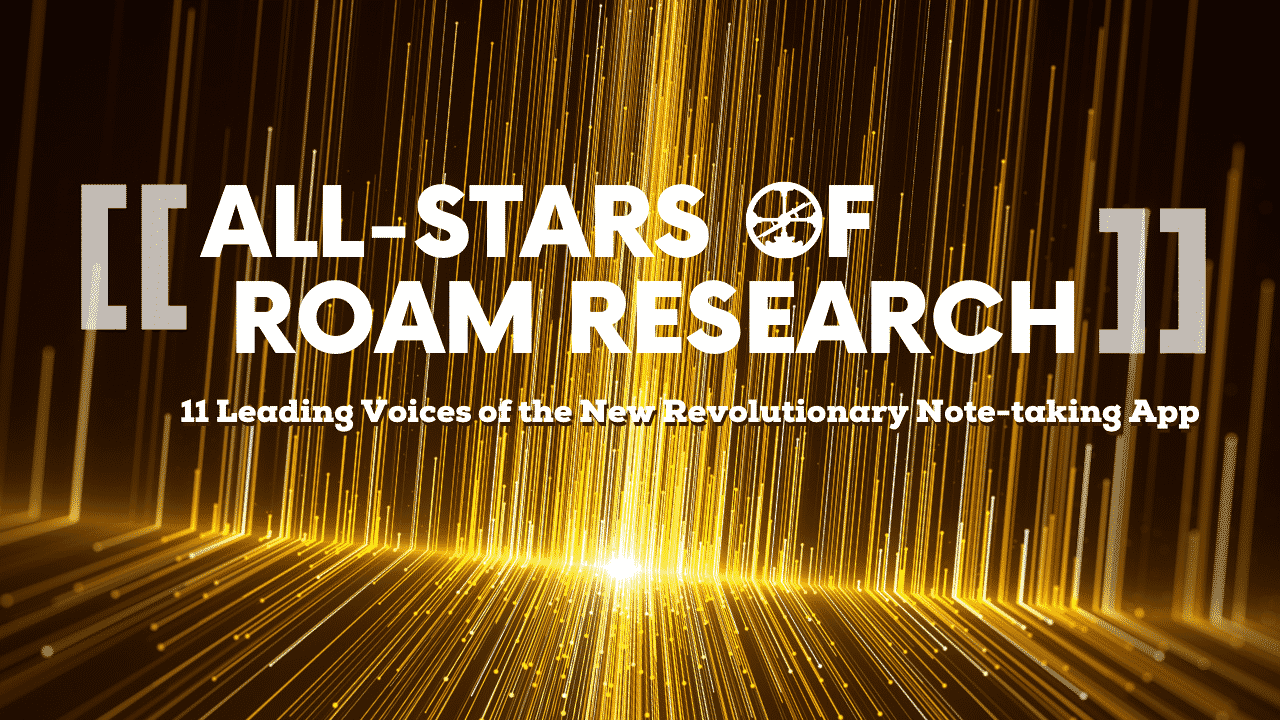 If you have a Roam database set up, you probably can’t stop using it and see why everyone is in love. I literally spend 8 hours a day writing and thinking in the application. I can’t get enough. It’s organizing my thoughts in ways that I never even imagined were possible and now I can’t imagine living without it!

A fair amount of time that I spent in the early days was trying to figure out the “best” ways to organize all the data I was putting in to it.

If you search on Google or Twitter or YouTube for “how to use Roam Research”, you’ll drown from the firehose of information…and the product is still only in beta! Heck, I even wrote my own introductory article about it to help others, like me, who are well out of academia and are life learners who want to use Roam to share what they learn with other people.

As a startup coming out of the shadows, Roam doesn’t yet have an official team creating and optimizing how-to content for new converts; so it relies on a community of “cultists”, or super-fans.

I can’t even count how many articles I’ve found and read or videos I’ve watched about using Roam. Using Roam, I’ve put together a list of 47 people who have written at least one good article about it. Suffice it to say that I have enough information to create my own video series; although, I don’t think I will.

Instead, I’d like to share with you the top “all-stars” I found that you might want to know about if you are interested in whipping your database into shape and become more productive with it.

Obviously, make sure you’re following the “official” places where Roam Research publishes data. For now, this is Twitter and Reddit and Slack:

Here are other important links you should dig into on the Roam Research website: 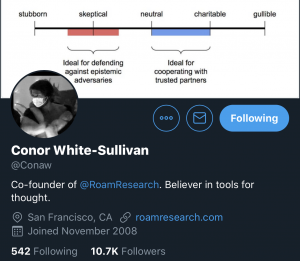 The actual “star” in my all-stars is Conor. As the founder and driver of Roam Research, he automatically earns this distinction. If you follow his account on Twitter, you’ll see high-level conversations about the thinking behind Roam and methods to capture information, in general. He also posts video on YouTube and is active on Reddit. 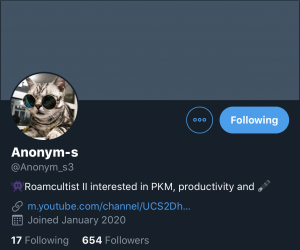 Probably THE inspiration for this article today is someone who is unknown—despite my best sleuthing techniques…but I’ll find you, my pretty!

Whether you are just getting started or already know most of the basics, you owe it to yourself to spend some time going through his FREE COURSE on YouTube.

Here’s a link to all the videos in the free course: From Beginner to Superuser: A Complete Roam Research Tutorial Course. Watch it straight through or pick and choose sections on project management, goal management, habit tracking, etc.

The course is only about a month old , and though I haven’t gone through the paid courses that are available (see below), I can’t imagine that they are—in any way—better than Anonym.s’s. It’s definitely the **Missing Manual to Roam**.

The other great thing about his YouTube course it’s brand new and covers the latest functionality improvements to the Roam application. 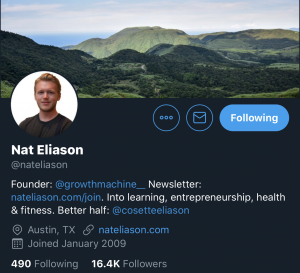 Entrepreneur and early-adopter, Nat Eliason, doesn’t exclusively post about Roam on his Twitter account. In fact, he doesn’t post much about it. However, he created a PAID video training course a while ago called “Effortless Output with Roam” delivered via Teachable that, if you believe the testimonials, is quite good.

The cost is somewhere between $99 and $118.80. (His marketing is inconsistent.) But, the good news is that as of today, he has something worked out with Roam Research where if you buy the course, you’ll get $100 in Roam “credits after you complete the course. We don’t know what Roam Research pricing will be but this is certainly a nice perk!

Again, I haven’t taken the course, but the syllabus for it looks quite thorough and Nat is a pro. If you’ve got an extra $100 to spare, you might consider his course. In addition to the Roam credits, you’ll get future updates as the course develops and a “lifetime membership” to the course forum. Otherwise, I’ll again recommend Anonym.s’s free course above. 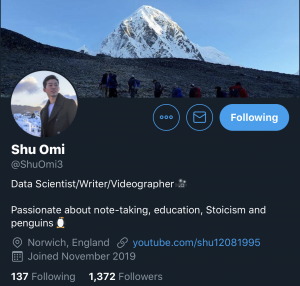 Another prolific “Roamer”, Shu Omi is trying to make a name for himself in the productivity niche. He also has a video course on YouTube called “How to Use Roam Research: A Complete Guide” There are currently 24 videos in the course covering mostly the basics and ways to use Roam if you’re in an academic environment.

I actually found Shu first so I’ve watched most of his videos. They’re all solid, albeit best at 1.25-1.5 speed. If I was starting over today, I would watch all of Anonym.s’s videos and then pick off a few of Shu’s to see another way of doing things.

And while Shu might not stay long-term with Roam, he does have insightful productivity tips so I think he’s worth following.

My Roam db is totally unusable at the moment

So I'm using @DynalistHQ until they fix it 😐 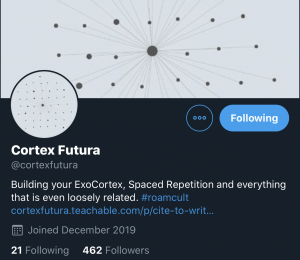 This one’s a bit hard to explain. Lukas Kawerau—a PhD-to-be in Germany—has a Roam video course for academics, again on Teachable, called “Cite to Write.”

I think the course is still being developed so if you review the course curriculum outline, it looks like it’s primarily for writers and academics. The brand “Cortex Futura” (@cortexfutura) seems to be where Lukas publishes his Roam thoughts and recommendations so that might be the best place to follow him.

If you want to get an idea of his video style, check out the current videos here: Cortex Futura on YouTube 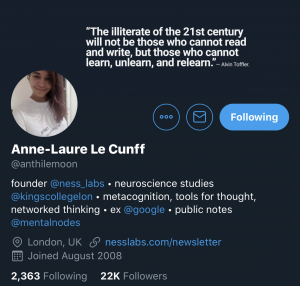 Prodigious writer and founder of Ness Labs, Anne-Laure has written over 150 articles on neuroscience and metacognition.

While she doesn’t seem to have any video content about Roam on her YouTube channel, she does have several articles on her website under the Roam tag. Here are a couple articles to get you started:

She has created a bookmarklet for Chrome, Firefox and Safari that I haven’t tried out yet but it looks interesting. 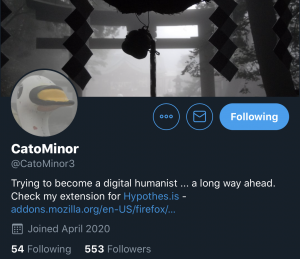 On Twitter, he’s known as @CatoMinor3 and he finds and shares practical tips for those of us who have drank the delicious Roam kool-aid and want to learn how to get even better at using the app.

Jan Odstrčilík, his real name, is also the creator of a browser extension for Hypothes.is called Hypothesify. He’s one of the many coder-types, like Anne-Laure above and Ramses below, who are creating additional functionality that layers on top of Roam. More on that in another article another day.

Together with fellow Tweeter Ramses Oudt (@rroudt), he has created a very useful—and getting larger everyday—”Roam Tricks Public Database“)” that attempts to codify what’s possible with Roam. 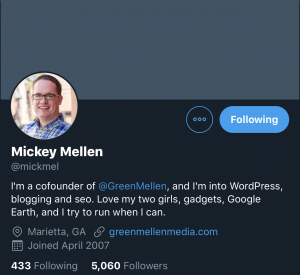 If you already have a grasp of Roam, Mickey’s videos might help you find new ideas for using it. I found his Metadata video helpful.

Based on his videos, it looks like he used to be a Notion fan but recently converted to Roam Research. Yay! More people for the #RoamCult!

There are three Twitter accounts other than @RoamResearch that are dedicated exclusively to using the application. You should follow all of them. 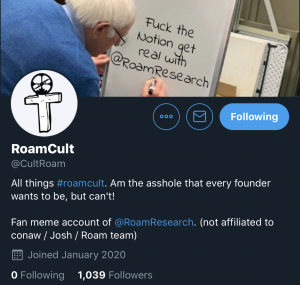 I’m not sure who’s behind this account. (I have an idea though.) Think of it as the UNofficial account of Roam Research. CultRoam aggregates and shares posts about Roam from throughout the twitterverse. If you’re using Roam, you’ll want to follow this account.

As a side note for those of you playing along, you’ll notice that this account @CultRoam owns the #RoamCult hashtag on Twitter. So, why isn’t there a @RoamCult Twitter account you ask? Well that’s a good question! Actually, that account exists @RoamCult, but it’s been suspended. (Someone was naughty I guess?) It feels like there’s some drama between those two accounts. Please let me know if you find out. I love startup gossip! 🙂 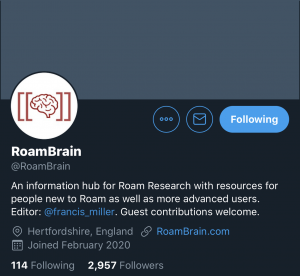 RoamBrain bills itself as an “information hub” and that seems about right to me. Their website publishes in-depth knowledge about using Roam from various authors. Several of the individuals on my list are featured on RoamBrain.com so it’s definitely worth taking a look. Their Twitter account also shares a lot of good thinking about using Roam.

RoamBrain is edited by Francis Miller who is passionate about information & learning design. 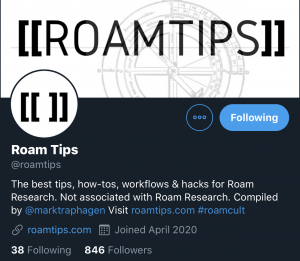 RoamTips is essentially the same type of “information hub” as RoamBrain; edited by someone else, Mark Traphagen.

The website has quite a few good how-to articles and continues to grow daily. It’s worth checking out or at least following on Twitter.

It probably goes without saying that I’ve invested a lot of time with Roam. Especially early on, I read/watched everything I could about it and still can’t get enough.

Since the beginning, certain people stood out above the others as reliable sources of information about this wonderful new application I’ve recently discovered. Those are the people that I’ve mentioned here.

There are, however, 3-4 dozen more people who have published excellent information about Roam Research that I’ve collected in a “Roam Tastemakers” list. Some of them are quite distinguished and have published first-rate articles/videos about broader topics such as how to organize digital information—Tiago Forte—or productivity in general: Francesco D’Alessio, Thomas Frank, Khe Hy, etc.